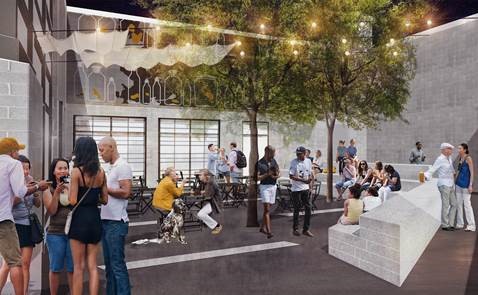 MassDevelopment and Union Square Main Streets today announced a new campaign for Bow Market Plaza in Somerville’s Union Square through the civic crowdfunding platform Patronicity and the Commonwealth Places initiative. Bow Market Plaza is a project that will transform a former storage building in Somerville’s Union Square into a space for small-scale storefronts. This Commonwealth Places campaign for the Bow Market Plaza will provide funding for programming in the market’s courtyard that will include rotating artists in residence who will lead workshops, curate gallery shows, and create large-scale murals and installations. The project aims to inspire the public, drive community interaction, and support small-scale local retailers, pop-up shops, and a new neighborhood brewery.

“Bow Market Plaza will provide local artists and small businesses with a low-cost, low-risk space in which they can test ideas and grow their businesses,” said MassDevelopment President and CEO Lauren Liss. “MassDevelopment is pleased to support this project, and we look forward to seeing Bow Market transform this once underused space into a hub of neighborhood activity.”

If the campaign reaches its crowdfunding goal of $50,000 by May 17 at midnight, the project will win a matching grant with funds from MassDevelopment’s Commonwealth Places program. Learn more and donate at patronicity.com/bowmarket.

“The heart of Bow Market is the courtyard. Brimming with various art installations, it will host weekly public happenings year-round,” said Bow Market Partner Matthew Boyes-Watson. “It will be accessible for community groups to gather and organize, for street artists to perform, and for local arts organizations to produce great festivals and events.”