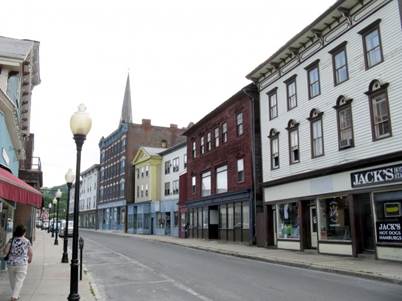 MassDevelopment and the NAMAzing Initiative, a collective of community members, business owners, and municipal leaders in the City of North Adams, today announced a new campaign through the civic crowdfunding platform Patronicity and the Commonwealth Places initiative. The NAMAzing Eagle Street Initiative will use funds to reinvigorate Eagle Street in the city’s downtown. The initiative will install a permanent parklet for concerts and social space; a gateway to mark the entrance of historic Eagle Street; and branded trash and recycling receptacles as well as custom pedestrian signage for each business in the district. The project will help revitalize and create a sense of place in a district that has historically been home to North Adams’ unique small businesses.

“Commonwealth Places helps support projects, like The NAMAzing Eagle Street Initiative, that leverage resources and inspire individuals to invest in their communities,” said MassDevelopment President and CEO Marty Jones. “We are glad to support the City’s efforts to realize Eagle Street’s potential by creating a lively, attractive business district where residents and visitors alike can engage with the North Adams community.”

If the campaign reaches its crowdfunding goal of $25,000 by May 5, 2017, at midnight, the project will win a matching grant with funds from MassDevelopment’s Commonwealth Places program. Learn more and donate at https://www.patronicity.com/NorthAdams.

“The NAMAzing Eagle Street Initiative is really about making Eagle Street more pedestrian friendly,” said North Adams City Councilor Ben Lamb. “We’re talking about gateways and portals that will invite people to the street, signage that will direct them where to go, and outdoor social space that will allow them to engage with the community during the warmer months here in the Berkshires.”

Commonwealth Places is a collaborative effort from MassDevelopment and Patronicity that leverages public support for placemaking projects through crowdfunding and a matching grant from MassDevelopment. The program engages residents in the development of strategic projects in their towns and cities. The program has supported successful campaigns across the Commonwealth, from Northampton to Hyannis.  Communities, nonprofits and other entities can learn more about these successful projects, donate to ongoing campaigns, and apply at www.massdevelopment.com/commonwealthplaces.