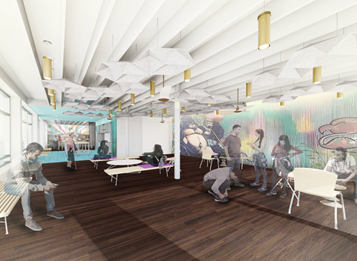 MassDevelopment and the North Shore Community Development Corporation today announced a new campaign through the civic crowdfunding platform Patronicity and the Commonwealth Places initiative. The North Shore CDC will use funds to build a 2,000-square-foot Espacio Community Program Space in the Point, an ethnically-diverse, low-income, and predominantly immigrant neighborhood in Salem. This community space will house strategic programming around neighborhood needs and services, along with business, educational, and recreational activities. Programming will be free and include public work and meeting space; dance, art, fitness, and sewing classes; job search, health insurance application, legal, and tax preparation assistance; cooking classes and more. The new space will provide opportunities to deeply engage residents in the Point neighborhood with the broader Salem Community.

MassDevelopment issued a $12.9 million tax-exempt bond on behalf of the North Shore CDC in July 2016 that the organization used to buy and renovate eight multifamily apartment buildings composed of 66 affordable rental units in The Point neighborhood. MassDevelopment also assisted the Department of Housing and Community Development with the approval of federal low-income housing tax credits, which provided approximately $7.4 million in equity for that project.

“This new community space will provide residents of the Point with invaluable programming ranging from tailored legal services to arts and recreational activities,” said MassDevelopment President and CEO Marty Jones. “MassDevelopment is proud to build on our investment in the development of The Point, a vibrant thread in the rich tapestry of Salem’s diverse community, with this new initiative.”

If the campaign reaches its crowdfunding goal of $30,000 by May 2, 2017 at midnight, the project will win a matching grant with funds from MassDevelopment’s Commonwealth Places program. Learn more and donate at www.patronicity.com/espacio.

“Building a new community center has been a top priority for the Point neighborhood for over 20 years and we're so excited to create a dynamic new space this year,” said Mickey Northcutt, North Shore CDC CEO. “Building it with the support and investment of donors through the Patronicity campaign, paired with the support of MassDevelopment, is the perfect way to build momentum and awareness of the space before it opens this summer.”

Commonwealth Places is a collaborative effort from MassDevelopment and Patronicity that leverages public support for placemaking projects through crowdfunding and a matching grant from MassDevelopment. The program engages residents in the development of strategic projects in their towns and cities. The program has supported successful campaigns across the Commonwealth, from Maynard to Hyannis. Communities, nonprofits and other entities can learn more about these successful projects, donate to ongoing campaigns, and apply at www.massdevelopment.com/commonwealthplaces.